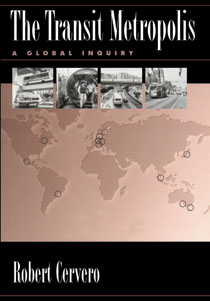 Around the world, mass transit is struggling to compete with the private automobile, and in many places, its market share is rapidly eroding. Yet a number of metropolitan areas have in recent decades managed to mount cost-effective and resource-conserving transit services that provide respectable alternatives to car travel. What sets these places apart?

In this book, noted transportation expert Robert Cervero provides an on-the-ground look at more than a dozen mass transit success stories, introducing the concept of the "transit metropolis"—a region where a workable fit exists between transit services and urban form. The author has spent more than three years studying cities around the world, and he makes a compelling case that metropolitan areas of any size and with any growth pattern—from highly compact to widely dispersed—can develop successful mass transit systems.

Following an introductory chapter that frames his argument and outlines the main issues, Cervero describes and examines five different types of transit metropolises, with twelve in-depth case studies of cities that represent each type. He considers the key lessons of the case studies and debunks widely held myths about transit and the city. In addition, he reviews the efforts underway in five North American cities to mount transit programs and discusses the factors working for and against their success. Cities profiled include Stockholm; Singapore; Tokyo; Ottawa; Zurich; Melbourne; Mexico City; Curitiba, Brazil; Portland, Oregon; and Vancouver, British Columbia.

The Transit Metropolis provides practical lessons on how North American cities can manage sprawl and haphazard highway development by creating successful mass transit systems. While many books discuss the need for a sustainable transportation system, few are able to present examples of successful systems and provide the methods and tools needed to create such a system. This book is a unique and invaluable resource for transportation planners and professionals, urban planners and designers, policymakers and students of planning and urban design.

Chapter 2. Transit and the Changing World
-Economic Restructuring: The Twin Forces of Concentration and Dispersal
-Motorization
-The Changing Nature of Travel and Its Causes
-Problems of an Automobile-Dependent World

Chapter 6. The Master-Planned Transit Metropolis: Singapore
-From Rickshaw to Rapid Transit
-Centralized Planning in Singapore
-Implementing the Plan
-Urban Transport in Singapore
-Restraints on Automobiles
-Looking to the Future: The Constellation Plan
-Learning from Singapore

Chapter 10. Creating a Linear City with a Surface Metro: Curitiba, Brazil
-The Curitiba Approach to Growth
-Evolution of Integrated Planning in Curitiba
-Land-Use Regulations and Supportive Policies
-World-Class Transit at a Low Cost: Transit Today in Curitiba
-Learning from Curitiba

Beyond Mobility authors Robert Cervero, Erick Guerra, and Stefan Al appear on the the Talking Headways podcast with Jeff Wood.

Listen below and read an excerpt from Beyond Mobility here.

Robert Cervero is Professor Emeritus of City and Regional Planning at the University of California, Berkeley. He is the author of six books in the urban transportation field, including The Transit Metropolis, Transit Villages for the 21st Century, Paratransit in America, America’s Suburban Centers, and Suburban Gridlock, as well as numerous articles and research publications.

Erick Guerra is Assistant Professor of City and Regional Planning at the University of Pennsylvania, where he teaches courses in transportation planning and quantitative planning methods. He has published a dozen articles on the relationship between transportation infrastructure, land use, urban development, and travel behavior.

Stefan Al is Associate Professor of Urban Design at the University of Pennsylvania. He has published several books, including Factory Towns of South China: An Illustrated Guidebook and The Strip: Las Vegas and the Architecture of the American Dream. As a practicing architect and urban designer, he has worked on renowned projects such as the Canton Tower in Guangzhou.