Skip to main content
Home   /   Blog   /   Pesticide Cross-Resistance
Reposted from the Chasing the Red Queen blog with permission. The concept of cross-resistance is well known in the medical world and in research on bacteria. The idea is that when a bacterial strain becomes resistant to one antibiotic, it can become resistant to another similar antibiotic even though the bacteria has never been exposed to the second antibiotic. Bacteria are the best organisms for investigating this sort of resistance and there is tremendous interest in understanding how bacterial evolution is capable of such a feat. A report in the journal Nature Communications in July 2014 (doi:10.1038/ncomms5352) gave details on a study that tested E. coli exposed to 12 different antibiotics and then looked at genetic changes in response. Based on the data, the researchers created a cross-resistance network of interactions among the drugs in relation to the bacterial genetics. The network suggested some interesting conclusions. First, resistance to one antibiotic can lead to multidrug resistance and not necessarily among drugs that interact. Second, the evolution of resistance does not necessarily rely on new mutations, but can arise from a variety of genetic modifications. Taken together, the results suggest that cross-resistance is not a particularly unusual outcome and may even be predictable. 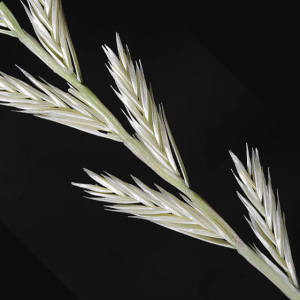 Lolium rigidum has developed resistance to multiple herbicides. Photo by microbiologybytes, used under Creative Commons licensing.
We see high levels of resistance to pesticides in insects and weeds in the world of agriculture. Can cross-resistance become a problem here also? It already has. Australia sheep ranchers depended on Lolium rigidum (rigid ryegrass) as a high quality forage. A great deal of effort went into developing better strains of Lolium in addition to strains that could withstand a farmer’s efforts to eliminate the weeds in the Lolium fields. When low wool prices forced many ranchers to shift to wheat farming, Lolium became a major weed of wheat fields. In many ways it was already adapted to the wheat fields having been a crop plant itself for so long. Worse, it rapidly became resistant to common herbicides and showed evidence of cross-resistance to new herbicides. Some strains of Lolium rigidum from Australia are now resistant to seven different categories of herbicides—more than any other common weed species in the world. This wouldn’t be such an issue if it weren’t for the fact that no new categories (Modes of Action) of herbicides have been developed since 1998 and the current herbicide arsenal is rapidly losing its effectiveness as newly resistant weed species emerge. If a multi-resistant weed with cross-resistance potential becomes widespread, farming in many places could be at risk. So cross resistance can emerge in one weed and in laboratory E. coli. Is that a huge problem? Perhaps. In a report published in Dec. 2014, Randall Bendis and Rick Relyea at the University of Pittsburg suggest the problem may be more widespread. They looked at ponds near agricultural fields that used the common insecticide chlorpyrifos, an organophosphate introduced in 1965. Common aquatic invertebrates in the ponds showed resistance to the chemicals used on the field and the closer the ponds were to the fields the greater the resistance (2014, Environmental Toxicology and Chemistry). That such resistance should emerge in non-target species as a consequence of proximity to the chemical is not surprising and has even been predicted. But Bendis and Relyea reported at the Ecological Society of America meeting in Aug. 2014 that lab tests showed cross-resistance in these organisms to unrelated chemicals that they have not yet been exposed to in the field. The consequences of such developments are hard to predict, but one of their observations is that resistance and cross-resistance could have serious consequences for the control of these organisms in ecosystems. The development of pesticide resistance is inevitable if the chemical is used intensively and across large regions. There are many ways to avoid this outcome. The first of which is to recognize that we continue to pursue chemical solutions to control problem organisms that are able to counter such chemical stress with ease. Now, we are faced with the fact that these organisms have even greater ability to resist our chemical attacks, abilities that we don’t understand but which we are facilitating with our actions.
agriculture
antibiotic resistance
ecology
evolution
food
herbicides
pesticides