Skip to main content
Home   /   Blog   /   The Rush for Blue Gold Peaks
Lester Brown of The Observer and Preside of the Earth Policy Institute explores the future of agriculture as our dependence on water hits its peak.  Peak oil has generated headlines in recent years, but the real threat to our future is peak water. There are substitutes for oil, but not for water. We can produce food without oil, but not without water. We drink on average four litres of water per day, in one form or another, but the food we eat each day requires 2,000 litres of water to produce, or 500 times as much. Getting enough water to drink is relatively easy, but finding enough to produce the ever-growing quantities of grain the world consumes is another matter. Grain consumed directly supplies nearly half of our calories. That consumed indirectly as meat, milk, and eggs supplies a large part of the remainder. Today roughly 40% of the world grain harvest comes from irrigated land. It thus comes as no surprise that irrigation expansion has played a central role in tripling the world grain harvest over the last six decades. During the last half of the twentieth century, the world's irrigated area expanded from close to 250m acres (100m hectares) in 1950 to roughly 700m in 2000. This near tripling of world irrigation within 50 years was historically unique. But since then the growth in irrigation has come to a near standstill, expanding only 10% between 2000 and 2010. 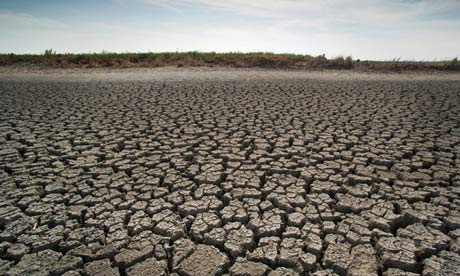 In looking at water and our future, we face many questions and few answers. Could the world be facing peak water? Or has it already peaked? Farmers get their irrigation water either from rivers or from underground aquifers. Historically, beginning with the Sumerians some 6,000 years ago, irrigation water came from building dams across rivers, creating reservoirs that then enabled them to divert the water on to the land through a network of gravity-fed canals. This method of irrigation prevailed until the second half of the 20th century, where with few sites remaining for building dams, the prospects for expanding surface irrigation faded. Farmers then turned to drilling wells to tap underground water resources. In doing so, they learned that there are two types of aquifers: those that are replenish-able through rainfall, which are in the majority, and those that consist of water laid down eons ago, and thus do not recharge. The latter, known as fossil aquifers, include two strategically important ones, the deep aquifer under the North China Plain and the Ogallala aquifer under the US Great Plains. Tapping underground water resources helped expand world food production, but as the demand for grain continued climbing, so too did the amount of water pumped. Eventually the extraction of water began to exceed the recharge of aquifers from precipitation, and water tables began to fall. And then wells begin to go dry. In effect, over-pumping creates a water-based food bubble, one that will burst when the aquifer is depleted and the rate of pumping is necessarily reduced to the rate of recharge. Today some 18 countries, containing half the world's people, are overpumping their aquifers. Among these are the big three grain producers – China, India and the US – and several other populous countries, including Iran, Pakistan and Mexico. Of the big three countries, the one most vulnerable to overpumping is India. Three-fifths of its grain harvest comes from irrigated land. And since only a minor share of its irrigation water comes from rivers, India is overwhelmingly dependent on underground water. Its millions of wells, each powered with a diesel engine or electric motor, are dropping water tables at an alarming rate. Accurate data are hard to come by, but India may have already passed peak water. The question is, will peak water be followed by peak grain or is there enough unrealized technological potential remaining to raise yields enough to offset any imminent losses from wells going dry? The world has quietly transitioned into a situation where water, not land, has emerged as the principal constraint on expanding food supplies. There is a large area of land that could produce food if water were available. Water scarcity is not our only challenge. Just as harvests are shrinking in some countries because of aquifer depletion, they are shrinking in other countries because of soil erosion. Among the more dramatic examples are Mongolia and Lesotho, which have each seen their grain area shrink as a result of soil erosion. And as a result of overplowing and overgrazing, two huge new dust bowls are forming in the world today, one in northwest China and the other in the Sahelian region of Africa. These giant dust bowls dwarf the US Dust Bowl of the 1930s. The bottom line is that water constraints – augmented by soil erosion, the loss of cropland to nonfarm uses, a plateauing of yields in major producing areas, and climate change – are making it more difficult to expand world food production. The question raised is this: Is it conceivable that the negative influences on future food production could one day offset the positive ones, leading to a cessation in the world grain harvest? Read more at The Guardian and find additional water readings at Island Press.
agriculture
conservation
farming
food
irrigation
oil
sustainability
water