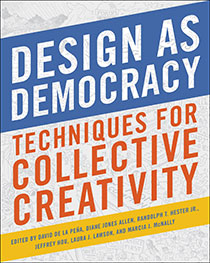 How can we design places that fulfill urgent needs of the community, achieve environmental justice, and inspire long-term stewardship? By bringing community members to the table, we open up the possibility of exchanging ideas meaningfully and transforming places powerfully. Collaboration like this is hands-on democracy in action. It’s up close. It’s personal. For decades, participatory design practices have helped enliven neighborhoods and promote cultural understanding. Yet, many designers still rely on the same techniques that were developed in the 1950s and 60s. These approaches offer predictability, but hold waning promise for addressing current and future design challenges. Design as Democracy: Techniques for Collective Creativity is written to reinvigorate democratic design, providing inspiration, techniques, and case stories for a wide range of contexts.

Edited by six leading practitioners and academics in the field of participatory design, with nearly 50 contributors from around the world, Design as Democracy shows how to design with communities in empowering and effective ways. The flow of the book’s nine chapters reflects the general progression of community design process, while also encouraging readers to search for ways that best serve their distinct needs and the culture and geography of diverse places. Each chapter presents a series of techniques around a theme, from approaching the initial stages of a project, to getting to know a community, to provoking political change through strategic thinking. Readers may approach the book as they would a cookbook, with recipes open to improvisation, adaptation, and being created anew.

Design as Democracy offers fresh insights for creating meaningful dialogue between designers and communities and for transforming places with justice and democracy in mind.

"This book is a win."
Planning

"Design as Democracy: Techniques for Collective Creativity provides a variety of techniques for engaging almost all potential influencers ...Overall, from novice designers exploring to experts working on engaged projects, readers should be able to
conveniently sort through and choose techniques applicable to their interests and project needs...this work can be viewed as a recipe book and also be pleasantly enlightening, particularly for readers new to the subject and those helping others learn and apply the content."
Landscape Journal

"Design as Democracy is a radical rethinking of participatory design by leaders in the field. Full of invaluable techniques for collective creativity, it is an indispensable resource for all designers who aspire to engage more deeply with communities."
Anne Whiston Spirn, author of "The Granite Garden" and "The Language of Landscape"

"Good recipes for democratic design are certain to include and be inspired by the diverse techniques and essential ingredients this book brings together. Its many stories reveal the profound power of designing together. Above all, its pages uphold democratic design's value and purpose in co-creating a more just and life-affirming world."
Paula Horrigan, Professor Emeritus at Cornell University

"Design as Democracy is a timely collection of essays that provides extremely useful techniques and best practices in transactional design, outlines the philosophical tenants that underlie such an approach, and offers international perspectives that highlight our common desire as humans to shape our communities in concert with our fellow citizens."
Kurt Culbertson, Chairman/CEO, Design Workshop

For decades, collaborative design has helped enliven neighborhoods and promote racial, economic, and social justice. But in an era marked by climate change, growing income inequality, and major advances in technology, designers are acknowledging the limitations of public forums and other conventional methods of community engagement.

Edited by six leaders in the field, Design as Democracy reinvigorates democratic design. It offers fresh insights for creating meaningful dialogue between designers and communities in the 21st Century and for transforming places with justice and democracy in mind. Featuring contributions from the most experienced and respected figures in community design, as well as emerging democratic designers, the book presents 60 techniques for engaging with communities in empowering and effective ways. Techniques range from “Cellphone Diaries” and “Cross-Cultural Prototyping” to “The Spatial Design Game” and “Mapping Environmental Injustice.” Filled with inspiration, techniques, and case stories for a wide range of contexts, this essential collection belongs in the hands of anyone striving to create vibrant, important places.

Check out Chapter 1 from the book below.

A Changing Climate Means A Changing Society. The Island Press Urban Resilience Project, Supported By The Kresge Foundation And The JPB Foundation, Is Committed To A Greener, Fairer Future.​ This Article Was Originally Published July 16, 2018 in TheCityFix.

For the past few years, a curious experiment in this sort of active engagement has been rolling out across the streets and plazas of Barcelona, Spain.

In 2016, to assist with its Municipal Action Plan, which set the priorities, objectives and actions for the city administration, the Department of Citizen Participation commissioned 10 small carts, or carritos, to deploy in each of the city’s 10 districts to collect proposals. Since then, teams of city staff have been charged with bringing the carritos into the everyday spaces of Barcelona.

Painted bright red and equipped with maps, drawings, handouts and surveys, carritos attract the attention of passersby and prompt conversations about how the city around them. In essence, the city has asked designers and planners to participate in the daily life of communities rather than expecting the other way around.

“Grounded in the Heart of the Community”

A cooperative of urbanists called Raons Públiques introduced the carrito to Barcelona back in 2009. The cooperative itself emerged as a multidisciplinary group of designers, anthropologists, sociologists and educators, whose goal was to challenge the city’s norms of participation and to find more inclusive ways of engaging citizens in the design of public spaces. The carrito, then, was not just a gimmick; it was a deliberately more humble and empowering way of relating with citizens about the places they valued. To one member of Raons Públiques, the carrito was powerful because it generated “a different kind of participation – one that is grounded in the heart of the community.”

But how exactly does the carrito work? The carts are parked usually at the edge of a plaza or alongside a busy pedestrian street, where people will naturally pass. By slightly disrupting the daily rhythms of life, they attract more than just the usual suspects who attend workshops. For traditional public meetings, people have to deliberately show up, and they need to dedicate precious personal time to the effort. On the street, casual encounters can be brief and more intimate.

The result is an entirely different kind of public participation. Community elders stop and tell stories, children muse over drawings or play with models, and people coming from work or going to the store ask about what is going on in their neighborhood, or just talk about the weather. If they’re interested, they may even take a flyer or a survey.

The ability to reach a more representative sample of people affected urban development is compelling enough, but an equally important transformation happens in the minds of the designers and planners themselves. The carrito takes experts out of their comfort zones, away from their desks, where planning can be an activity of abstraction, and into the reality of the street. Here, a new relationship with communities is required, one that is more open to listening, observing and appreciating what is already there. It encourages an attitude of curiosity and places value on local knowledge.

The carrito is not the only way to create active engagement, nor is it intended to replace tried and tested planning processes, but it does open up possibilities for more creative approaches to city making.

For many public projects, participation is now a required component of the design process. As a result, engagement is framed as something tedious that designers are obliged to do, rather than something that enriches the design process with valuable insights and community connections. Public meetings and workshops are not going away, and they still provide important spaces for more formalized presentations and for gathering input. But for designers who really want to listen and observe, these venues alone, however well crafted, will be inadequate.

For Barcelona’s part, the carritos have proven instrumental to the success of the Municipal Action Plan, which has in turn launched dozens of citizen-driven planning initiatives. Because of their obvious utility, carritos have been appropriated for use in several neighborhood plans as well as the redesign of the city’s famous Eixample grid system too, also known as “superblocks.”

The carritos are only a small part of Barcelona’s shift to a more robust participatory framework, which includes better online platforms and more transparency overall. Laia Torras Sagristà, who has worked on citizen participation for the city since 2011, sees these efforts as ways to make engagement more instrumental in the development of design projects. Beyond that, however, the transformation of attitudes can be more challenging. Planners and designers don’t always appreciate local expertise, and often don’t want to give up their control over the process. The carrito can’t ultimately force that change, but it can’t hurt either. If it helps to emphasize the need for multiple ways to engage with citizens, that is a start.