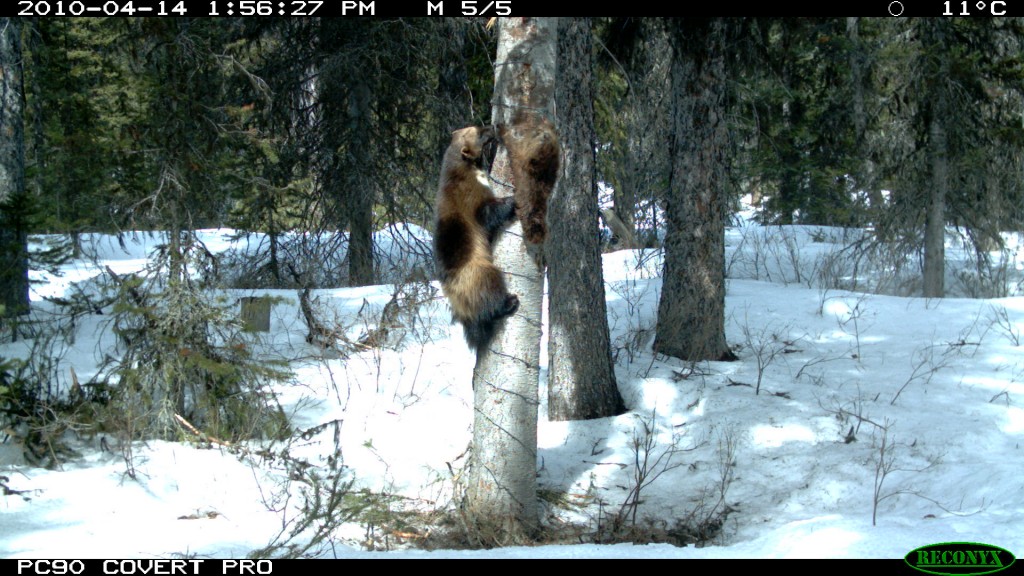 Wolverine taking the bait at a DNA study hair snare to study connectivity within the matrix in Banff. Photo by Anthony Clevenger, Banff National Park. Used with permission.
Ecological resilience has great bearing on carnivore conservation. In the 1970s, ecologist C. S. (a.k.a. “Buzz”) Holling first defined resilience as the ability of ecosystems to absorb disturbance and still persist in their basic structure and function. With regard to the large carnivores (or any species), ecologists measure resilience by looking at how connected their populations are. They measured resilience via population connectivity, because of the importance of genetics to the health and vigor of populations. Why is resilience so important? Climate change, widely evident worldwide, will increase habitat fragmentation and shift plant community ranges. Today winters are measurably shorter than thirty years ago, the glaciers disappearing apace. Snow-dependent species like the wolverine (Gulo gulo) will be hit hardest by climate change as they find their habitat shrinking to the highest peaks. Carnivore ecologist John Weaver says, “Nowadays, climate change has put such an exclamation mark on Holling’s breakthrough concept about the importance of resilience. The question is how are these animals going to sustain their resiliency into a very different future? Big, intact, well-connected landscapes offer the best opportunity for animals to move and find their new ‘normal’ in terms of environmental conditions.” To apply the concept of resilience, corridor ecologists such as Jodi Hilty begin by defining populations at three nested levels. At the smallest scale we find the individual organism, and at the next scale the local population, also called a deme. At the largest scale lies the metapopulation, also known as a “population of populations.” The space between local populations is the matrix. Resilience accrues from the above three population levels and an organism’s ability to move well within the matrix. 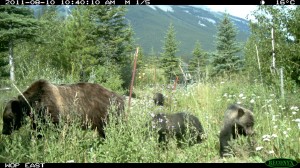 Grizzly bear and cubs using wildlife overpass in Banff National Park, demonstrating connectivity within the matrix. Photo by Anthony Clevenger, Banff National Park. Used with permission.
Using grizzly bears (Ursus arctos) in Banff National Park as an example, a female grizzly is the individual. A female with cubs plus two or three other bears that inhabit the same small valley in the park make up the local population. All the bears in Banff historically formed one population, but the Trans Canada Highway (Highway 1) and related human development has fractured it into two or more populations and diminished the natural movements and exchange of animals and their genes. To ensure genetic connectivity and that species don’t become extinct (called persistence), we need connectivity between populations within a metapopulation. This means having a permeable matrix. Weaver took a close look at large carnivore resilience in North America, working at the three scales described above. He assessed individual resilience based on the capacity of an individual to switch between foods or habitats should one of these factors decline. He evaluated local population resilience based on mortality rates, which include stochastic (unpredictable) events, such as climate fluctuations and disease. At the metapopulation level, he evaluated resilience based on effective dispersal of young animals—which had to do with connectivity of travel corridors. He added two more dimensions to this resiliency framework: sensitivity to human disturbance and response to climate change. Taking the above into consideration, he found that some species, such as the wolf (Canis lupus), which has a high reproductive rate and high survival of its young, are far more resilient than others, such as the wolverine, which has a low reproductive rate and low survival of its young. Some species are less resilient because they have very narrow habitat and food needs and are poor hunters. For example, lynx (Lynx Canadensis) can only survive by eating snowshoe hares (Lepus americanus) and are such poor hunters that they frequently starve to death. To ensure persistence of large carnivores in an increasingly hotter, more fragmented world, we need to ensure connectivity of metapopulations over very long distances and even international boundaries, such as between grizzly bears in Banff and those in Glacier National Park. This calls for maintaining a permeable matrix. But further, we need to consider resilience when creating endangered species recovery plans.
big cats
biodiversity
climate change
connectivity
conservation
ecology
bears
population
resilience
wildlife
carnivores
wolves