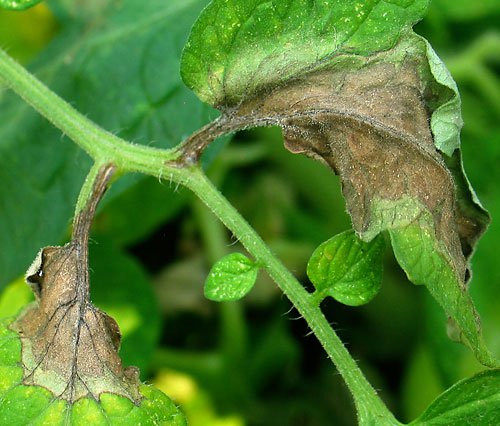 Photo courtesy Cornell's Long Island Horticultural Research & Extension Center.
Reposted with permission The first inkling that things were really bad was the news that late blight had not only wilted and rotted my own tomatoes but Red Fire Farm’s (Montague, Massachusetts) as well. Farmer Ryan Voiland has been growing and selling tomatoes since middle school, setting up a road-side stand outside his parent’s home. A decade or so later Voiland–a thirty-something soft-spoken organic farmer with a degree from Cornell–had become an award winning tomato grower. “That first year was remarkable,” recalled Voiland, cracking a shy smile, “we heard about the Massachusetts Tomato Contest …. had a good crop and managed to send in some specimens.” Red Fire’s tomatoes won five out of twelve awards, more than any farm, organic or conventional, had ever won in a single year. Red Fire, now a successful Community Supported Agriculture farm or CSA, grows more than 150 different tomato varieties offering them up for tasting at their annual Tomato Festival. But in 2014, a fungus-like disease called Late Blight had made its way up the valley, jumping from one farm to another until it hit Red Fire. Tomato crops died within days. Rows of once lush plants resembled vegetative versions of Zombie armies; upright stalks studded with browned blight infested leaves. Large brown spots blossomed on the fruits turning them soft and unsellable. That my kitchen garden, just a few miles away from Voiland’s farm succumbed as well, was no surprise; I am not the most attentive farmer. When I can amble down to the Red Fire farm stand and purchase plump red Brandywines, Big Yellow Zebras, or Sungolds, tending to tomatoes is not a make or break situation. But for independent farmers and CSAs, such large-scale crop loss can be devastating. The 2014 outbreak left local tomato fields in tatters, but it wasn’t the worst case of the blight to hit Red Fire. In 2009, writes Voiland in his farm blog, Late Blight “caused massive crop loss and severely impacted us financially.” Voiland had plenty of company that season as the blight ripped into tomato plants all along the east coast and mid-Atlantic. Chef and author Dan Barber penned a New York Times op-ed about the outbreak, “You Say Tomato, I say Agricultural Disaster.” The article was just one of hundreds published that year. “I, myself,” wrote Martha Stewart in a 2009 blog, “have lost seventy percent of the fifty different varieties in my garden. Even though I still have tomatoes on the vine, many of the beautiful heirloom varieties, which were planted, never had a chance.” Stewart’s post was accompanied by an image of an ugly diseased tomato, a far cry from the doyenne’s trademark perfection. 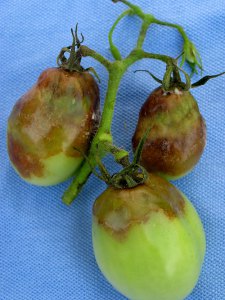 Photo courtesy Cornell's Long Island Horticultural Research & Extension Center.
Diseased tomatoes are nothing new, whether grown by conventional or organic tomato farmers. Voiland and others are constantly on the lookout for early blight and black mold; cut worms and leaf miners; and all sorts of specks, spots and cankers. But Late Blight, caused by the fungus-like Phytophtora infestans–a pathogen with an affinity not only for tomatoes but also for their botanical cousin the potato–was a new one for Northeast growers. And, ever since its 2009 debut, the blight that wipes out crops within days has returned each growing season. For Voiland and many CSA farmers tomatoes are an essential crop. A classic summer vegetable. But ever since blight, tomatoes have become harder to bring to market. That 2009 outbreak may have been the first to hit northeast tomatoes but it certainly was not the first time Phytophthora went pandemic. Nor were tomatoes the first vegetable (or, fruit) to be taken by blight. Over a century ago a mysterious potato disease spread across Europe like wild fire. Healthy plants died within days. Potatoes in the ground turned putrid. Tenant farmers in Ireland were hit particularly hard. Some one million Irish died and more than a million sailed for distant shores. Late blight had touched off the infamous Potato Famine, altering social structures, politics, and agricultural practices–its effects relevant even today. Since its emergence on potato fields blight has remained the bane of farmers around the globe. Even so, no one expected the 2009 outbreak. “In our experience,” writes Cornell plant pathologist William Fry and colleagues of the outbreak in their recent article The 2009 Late Blight Epidemic in Eastern U.S., available online by the American Phytopathogical Society, “the scale of pathogen release was completely unexpected and unprecedented.” Fry has tracked the plant pathogen to its roots and teased apart its DNA. So what changed? How did this happen? Using an NCIS-like approach including DNA finger-printing, the group traced the 2009 outbreak to a single source and a single strain, subsequently named “US22” (there are dozens of late blight strains; but US22 was the bane of 2009 growers.) While the scenario played out like an agro-terrorist attack with blight hitting just about everywhere in the east, the cause was disturbingly mundane. Blight infected plants, traced back to big box distributors like Home Depot, Kmart, Lowes, and others, which had purchased their plants from one national plant distributor. News reports fingered Alabama-based distributor Bonnie Plants a charge the company vehemently denied though that summer, though they pulled their plants from a dozen states and took a financial hit. Since the outbreak, working with Cornell plant pathologists, the company has cleaned up their act. Now, it seems as if blight is here to stay. Even so, no matter the source, the mere existence of the fungus-like blight isn’t enough to cause disease. For Blight to take wing, it requires moderate, wet conditions. When the temperatures hover around the 70s and the rains settle in–an apparently healthy crop can disintegrate within days. Had 2009 been hot and dry, Voiland and others might have been hauling out the hoses and irrigation equipment, rather than contending with Blight. But along the east coast, conditions both in 2009 and 2014 have been more reminiscent of Ireland and England than Arizona. Since that initial outbreak, the threat of late blight has loomed large. Before 2009 few tomato growers in the Northeast worried about losing whole crops to late blight; now even home gardeners are wondering how to tame it or better, avoid it altogether. Should the weather turn cool and damp and the blight start flying this summer there are few options other than: Originally published in the Montague Reporter April 2015
agriculture
farming
diseases
food
pathogens
tomatoes