Here's your chance to ask Gabe Klein, former Department of Transportation director for Washington, DC and Chicago, and author of the new book, Start-Up City, your questions about how to get more stuff done in your city.

Gabe Klein is the former DOT director under Mayor Rahm Emanuel’s administration in Chicago and former Director of the District DOT under Mayor Adrian M. Fenty. Before working in local government, Klein worked at a few startups, including Zipcar. In 2015, in addition to his other roles, Klein joined Fontinalis Partners as an SVP (Special Venture Partner) on their new fund. Klein continues to advise a number of technology and mobility companies, including Transit Screen and Phone2Action, where he provides leadership on strategy. He is on the board of NACTO and Streetsblog. 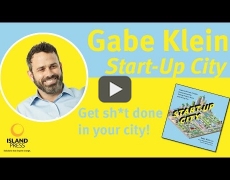