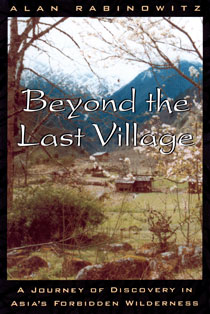 Beyond the Last Village

A Journey Of Discovery In Asia's Forbidden Wilderness

In 1993, Alan Rabinowitz, called "the Indiana Jones" of wildlife science by The New York Times, arrived for the first time in the country of Myanmar, known until 1989 as Burma, uncertain of what to expect. Working under the auspices of the Wildlife Conservation Society, his goal was to establish a wildlife research and conservation program and to survey the country's wildlife. He succeeded beyond all expectations, not only discovering a species of primitive deer completely new to science but also playing a vital role in the creation of Hkakabo Razi National Park, now one of Southeast Asia's largest protected areas.

Beyond the Last Village takes the reader on a journey of exploration, danger, and discovery in this remote corner of the planet at the southeast edge of the Himalayas where tropical rain forest and snow-covered mountains meet. As we travel through this "lost world" -- a mysterious and forbidding region isolated by ancient geologic forces -- we meet the Rawang, a former slave group, the Taron, a solitary enclave of the world's only pygmies of Asian ancestry, and Myanmar Tibetans living in the furthest reaches of the mountains. We enter the territories of strange, majestic-looking beasts that few people have ever heard of and fewer have ever seen -- golden takin, red goral, blue sheep, black barking deer. The survival of these ancient species is now threatened, not by natural forces but by hunters with snares and crossbows, trading body parts for basic household necessities.

The powerful landscape and unique people the author befriends help him come to grips with the traumas and difficulties of his past and emerge a man ready to embrace the world anew. Interwoven with his scientific expedition in Myanmar, and helping to inform his understanding of the people he met and the situations he encountered, is this more personal journey of discovery.

"...often reads like a dispatch not just from a distant place but from a distant time, a letter home from the Age of Discovery that was somehow delayed in transit for a couple of centuries."
New York Times Book Review

"It feels like Conrad's Heart of Darkness in reverse, as he escapes the 'civilisation' of a brutal military regime to find peace and light in the farthest lands."
Guardian

Chapter 1. Yangon, 1993
Chapter 2. Tarnished Golden Land
Chapter 3. Of Rhinos and Sea-Gypsies
Chapter 4. Gateway to the North
Chapter 5. Last Prayers at Shwedagon
Chapter 6. Into the Triangle
Chapter 7. Savage Land
Chapter 8. For the Love of Salt
Chapter 9. In the Shadow of Hkakabo Razi
Chapter 10. Lost Tribes of Tibet
Chapter 11. Pygmies of the Adung Wang Valley
Chapter 12. The Last Village
Chapter 13. Touching the Snow
Chapter 14. Child of Beyond
Chapter 15. Back into the World
Chapter 16. Genetic Fingerprints
Chapter 17. The Mysterious Leaf Deer
Chapter 18. The Ghost Valley
Chapter 19. Through the Looking Glass
Chapter 20. The Return

Island Press grieves the loss of Alan Rabinowitz, Island Press author and dedicated wild cat scientist. Alan was a fierce conservationist who left an indelible mark on our world. His impact lives on through Island Press and his many contributions to the environmental community. We join Panthera in honoring Alan's memory. From Panthera:

The Board and staff of Panthera, the global wild cat conservation organization, mourn the loss of our co-founder and one of the world’s most visionary and widely admired wild cat scientists, Dr. Alan Robert Rabinowitz, who died today after a journey with cancer.

Panthera CEO and President, Dr. Fred Launay, stated, “The conservation community has lost a legend. Alan was a fearless and outspoken champion for the conservation of our planet’s iconic wild cats and wild places. As a lifelong voice for the voiceless, he changed the fate of tigers, jaguars and other at-risk species by placing their protection on the agendas of world leaders from Asia to Latin America for the very first time.”

Launay continued, “Inspiring a generation of young scientists, the boldness and passion with which Alan approached conservation was captivating and contagious. While we are devastated by his passing, we are comforted by the fact that his extraordinary legacy of advocacy for the most vulnerable creatures will live on in his legion of students and followers.”

Among a lengthy seminal list, some of his crowning conservation achievements are the conceptualization and implementation of Panthera’s Jaguar Corridor Initiative, an unprecedented effort to connect and protect jaguars from Mexico to Argentina, and the establishment of the world's first jaguar sanctuary in Belize. Forever in awe of the magnificence of the tiger – the world’s largest cat – Dr. Rabinowitz achieved victory after victory for the species, including the creation of the largest tiger reserve, the Hukaung Valley Tiger Reserve, in northern Myanmar.

Read more about the career of Alan Rabinowitz.


To share Alan's ideas and further his legacy, we offer 50% off the print and e-versions of all Alan's Island Press books:

An Indomitable Beast: The Remarkable Journey of the Jaguar.

Life in the Valley of Death: The Fight to Save Tigers in a Land of Guns, Gold, and Greed

Chasing the Dragon's Tail: The Struggle to Save Thailand's Wild Cats

Beyond the Last Village: A Journey of Discovery in Asia's Forbidden Wilderness

We also offer a free excerpt from Alan's most recent book, An Indomitable Beast: The Remarkable Journey of the Jaguar.